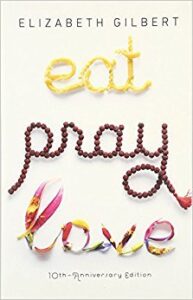 This book got me glued at the beginning for the fact it was delivered in a brutally honest manner with self-deprecating humor infused in between.
I do like the way she questioned some of her beliefs, rants about them and then I would not call them repetitive but reflecting on how her mind interprets or travels around some of those painful areas. It’s difficult to jump into the unknown and take a break when you are heartbroken, I appreciate her for that… She set out on the most needed journey at the most sensitive time of her life.
I liked the way she has tapped into her mind struggles while trying to sustain a mediation session and verbalized them, this level of detailing stood out.

Frankly, for me, I lost interest in the “Indonesia” part and do not find her reason to visit that place too compelling. She has agreed on the same lines while during her airport mind talk. The whole stay and stories about in and around got boring. Especially, I hated to read the broken English excerpts that were long which were an “as-is” conversation with her medicine man of Indonesia. I believe they were repetitive, sometimes gross, and inconsequential.

Her quest for love seemed influenced by many factors like someone who would ‘spoil and dote’ on her, rather than a satisfaction gained after meeting a ‘Kindred’ soul.
Overall it gets me to keep the rating at ‘three stars’. An interesting one time read.

Join us for updates.